Author Molly MacRae invited me to take part in a "blog roll" on Nov 28, so here goes. Each author answers 10 questions and then lists links to other participating authors at the end.

What’s the working title of your book?
The Bootlegger’s Nephew

Where did the idea for it come from?

It came from my interest in local history and a deep fascination with Prohibition. Actually, the story was supposed to be about archaeology during its “Wild West” days before it became an academic discipline, but Prohibition took over. The novel is set in Champaign County, Illinois, where I currently live, but I changed the name of my hometown from Champaign-Urbana to Big Grove.

What genre does your book fall under?

Which actors would you choose to play your characters in a movie rendition?

Good question! I can’t think of an actress, but a dancer from Urbana Country Dancers has the perfect 1923 face for my youngest character, Anna Maria Junker. She looks like she could step into Flapper dress and be completely at home.

What’s the one-sentence synopsis of your book?

An Illinois physician uses his knowledge of local geography and archaeology to catch a killer and break up a gang of bootleggers during Prohibition.

Will your book be self-published or represented by an agency?

This book was published by Hilliard and Harris in February 2012. It is available as a trade paperback and Kindle edition at Amazon.

How long did it take you to write the first draft of your manuscript?

At least two years. My day job as an archaeologist at the University of Illinois kept interfering…

What other books would you compare this story to within your genre?

Who or what inspired you to write this book?
My work at the Illinois Archaeological Survey was the original inspiration. My older colleagues tell such great stories about early Midwestern archaeology—all true. One of my favorites was about William Mac Adams, a famous amateur archaeologist and newspaperman during the late 1800s. When he died from falling into a creek while drunk, his wife celebrated by burning all his papers.
What else about your book might pique the reader’s interest?
Bootlegger’s Nephew is a complete departure from my four published Lisa Donahue archaeological mysteries. The characters, Illinois Junker and his German wife, Martha Junker, took over my imagination along with their feisty nineteen-year-old daughter Anna. The research on the dress, language, speakeasies, and the gazillion ways to make and transport bad booze during the 1920s fascinated me. When my publisher turned down my request to include the non-fiction research as a supplement at the back of the mystery, we compromised by including a short glossary of 1920s slang at the front of the book. Then I published the Supplement as a free pdf download on my website: www.sarahwisseman.com

Now follow these links to some of my favorite authors:
Molly MacRae, author of Wilder Rumors, Lawn Order, and Last Wool and Testament, as well as several short stories in Alfred Hitchcock Mystery Magazine. Go to http://amyalessio.com/?p=7917 for her post on Amy Alessio's blog, and Molly's author website is here.

David Ingram, winner of the Robert L. Fish Award for his 2011 short story "A Good Man of business," published in Ellery Queen Mystery Magazine. Read all about him and follow his posts at:
http://davidhingram.com/

Posted by Sarah Wisseman at 10:34 AM No comments:

According to my mother, now long deceased, one of her relatives who was on her deathbed during Prohibition, had a last request. She wanted a "glass of beer," so the storyteller went down the street and got one for her. Too bad I don't remember which ancestress that was, or which city she was in. But the glass of beer no doubt came from a speakeasy or blind pig, one of the many establishments that sold liquor during the 1920s. Most of these buildings looked like something other than what they were: a laundry, a lawyer's office, an ice cream parlor, or a shoe store. 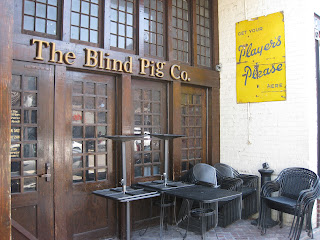 One of my favorite pieces of research for The Bootlegger's Nephew was discovering the plethora of words for booze or being drunk. “Ossified,” “spifflicated”, “half-seas over,” “giggle-water,” “panther piss,” and “coffin varnish” are just a few. It was also illuminating to learn that a) an ordinary person could buy a baby still at the local pharmacy, b) many families made their own liquor at home ("bathtub gin"), and c) that the law said you couldn't buy or transport booze, but it was okay to consume it. As many folks agreed, this was a stupid law, and it didn't work well because most people ignored it and police, mayors, ministers, and heads of families openly circumvented it.

My other discovery was that truth is stranger than fiction--really. An online chapter by Allen J. Singer about Cincinnati speakeasies and drinking habits told the true story of a speakeasy in a private home where the bar is in a downstairs room, and the ten-year-old son of the owners dispenses liquor down a tube from upstairs. When an alarm tells him agents are on their way to inspect, he whisks a rug over the booze tube and artfully strews his homework around to hide the evidence.

This story was too good to ignore, so I stole it and moved the speakeasy to Big Grove, Illinois.
Posted by Sarah Wisseman at 2:54 PM No comments: 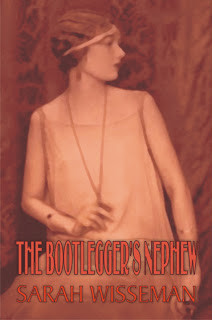 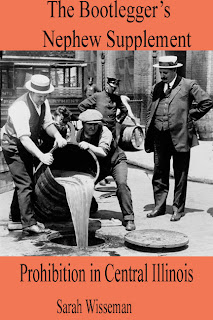 Who is the Junker family? Doc Earl "Illinois" Junker is a 40-year-old family physician and amateur archaeologist with a German wife Martha (nurse and member of the local temperance league), a father (Thomas Junker, a retired physician), and four children. Doc Junker's eldest daughter, 19-year-old Anna, competes with him to be the protagonist in The Bootlegger's Nephew. In this story, "Illinois" Junker uses his knowledge of local geography and archaeology to track down a murderer and break up a gang of bootleggers during Prohibition.


Bootlegger is set in central Illinois in 1923--in the thinly-disguised town of "Big Grove" (Champaign-Urbana). In order to write this tale, I used local archives, several books, maps, Sears Catalogs, and photo collections, all described in the Supplement. The themes of the novel include making illegal booze and home remedies during Prohibition, medical practice before antibiotics, early archaeology, the changing roles of women during the 1920s, and prejudices against immigrants (especially Germans) between the two world wars.

This website will grow with links to all of the above themes! Stay tuned...
Posted by Sarah Wisseman at 2:12 PM No comments:

The Bootlegger's Nephew is fully published in three editions! They are paperback, Kindle, and Nook. My thanks to Stephanie Reilly at Hilliard and Harris for making this possible. With print-on-demand and the current ebook technologies, the time between book acceptance and publication is far shorter than it used to be...no more waiting years for a novel to be born...
Posted by Sarah Wisseman at 3:43 PM No comments:

Introducing The Bootlegger's Nephew and the Junker Family series

The Bootlegger's Nephew (Hilliard and Harris 2012) is the first historical mysteryby Sarah Wisseman. Special thanks to colleagues at the Illinois State Archaeological Survey for archaeological history, to my husband for medical knowledge, and to fellow authors Molly MacRae and Laura Alden for careful readings and comments on the manuscript.
Thanks too to the other writers have contributed useful historical tidbits and helpful hints on technique: Jeanne Dams, Barbara D’Amato, Mary Welk, and Tasha Alexander.